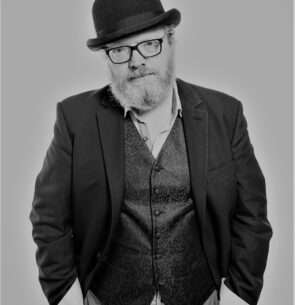 Arwyn Bailey, known as The Time Lord, is one of the most highly sought after event and trade show photographers in the U.K. He has worked with large corporate entities such as fortnite, xBox 360, Microsoft, Sony Hawkeye, to name a few. He has also worked at the biggest trade and tech shows on the planet such as Gamescom in Cologne, Mobile World Congress Barcelona, and Design Junction in London. Arwyn has also worked with SME’s and startups, helping brands to tell their story through visual images.

When he was given his first camera aged 4 or 5, Arwyn recalls this being like holding a magic box in his hand, and he was hooked. He studied the art form of photography at college, honing his technique in the darkroom, processing film, dodging and burning when processing his images under an enlarged, as well as setting up his own darkroom at home. Even today he will take himself out, when time permits, shooting with film, on his collection of vintage cameras, and his latest acquisition of a reproduction 10 x 8 field camera.

“Going back to the roots of photography keeps me sharper when shooting with modern digital cameras. Film not only has a place in my heart and affections, it also has a place, even today, within the world of photography,” Arwyn explains. Using the persona of being “The Time Lord” Arwyn has carved out a successful career as a corporate and events photographer and more latterly, as a videographer. His use of light, which he firmly believes is everything and can make or break an image, arises out of a passion and affinity for the greatest artist (in his opinion) ever to wield a brush, William Turner.

Perception, Experience, and Reality: Do Photographs Tell the Truth?

The way in which we perceive what might be a reality for us can be changed by and through our experience. Our reality is then shifted somewhat. As one of the most sought after event photographers in the U.K., Arwyn Bailey will use “magic” and his experiences to demonstrate this process from illusion to reality. […]